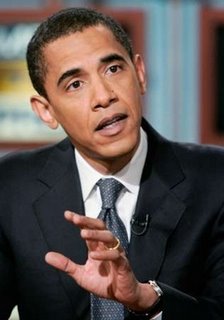 Illinois Democratic Senator Barack Obama revealed Sunday morning that he is considering making a run for the White House in 2008. Obama told Meet the Press host Tim Russert that despite comments he made in 2004, he is now giving serious thought to a Presidential campaign.

Obama, though being deliberately vague, hinted that he would be running for the White House by using the word "run" as many times possible within a twenty second time period. Obama told Russert, "We have a long and rigorous process. Should I decide to run, if I ever did decide to run, I'll be confident that I'll be run through the paces pretty good."

Reporters asked President Bush in a White House Press Conference this afternoon how he feels about Obama succeeding him in the White House. Bush shared this chilling response, "Let's take a closer look at this so called Senator from Illinois. His first name is Barack which rhymes with Iraq. His middle name is Hussein and his last name is Obama which rhymes with Osama. Coincidence? I mean sure he's sexy, but its painfully obvious that the man is a turrarist."

When reporters asked Senator Obama if he had any thoughts on the President's comments, he had this response, "The President thinks I'm sexy?"

It just all seems so 'logical' doesn't it?

it pains me, dweeb, to see you insult llamas this way.....DUCK!!!! (llama spit! Dang that stuff stinks!)

Thanks for the toon idea of bar-dork looking like spock. i have my work cut out for me today. :]

I never had a crush on Spock. But the second that Obama calls me because things aren't working out with the wifey, I am there.

yo - "llama llama duck" - This was supposed to be dedicated to you. I'm hurt.

mist1 - You would make a great first lady. Just don't leave your undies in the Rose Garden.

But dweeb! You used llama in the same sentence of someone with the name hoo-pain. Have you no shame? ROFL!!!!!

Being that I am a bonafide trekkie...

Have you ever noticed how much he looks like Elian Gonzalez? Do you remember him? He was the little Cuban boy that was being held in Miami a few years ago. Go to Google Images and Google Elian Gonzalez, and you will see he looks exactly like Barack Obama. It's eerie. It's sort of like how Prince Harry looks more like James Hewitt than anyone in the Royal family. It's bizarre.

I can't believe the president said those things. How old is he? Come on! Obama rhymes with Osama. Gee prez you officially passed the first grade! And the fact that he said he was sexy? Well that just openes up a WHOLE lot of questions about him. haha

His ears are spoc-tacular! LoL :)

Wow, I never thought of it like that before!

I think I have to run now.