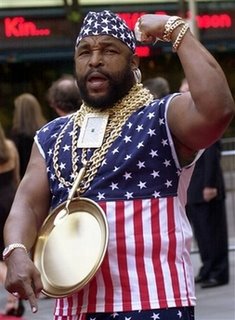 Mr T announced Thursday at the Television Critics Association summer meeting that after witnessing the destruction wrought by Hurricane Katrina, he could no longer bear to wear his signature gold chains.

Mr. T, whose real name is Lawrence Tero, told reporters, "As a spiritual man, I felt it would be a sin against my God for me to wear all that gold again because I spent a lot of time with the less fortunate. It was like The Lord himself came to me and said, 'T., how the hell can you wear all of that gold jewelry when all of those poor mothers can't even buy a hotdog?' I was surprised. That wasn't how I expected The Lord to talk."

Mr. T was heavily critical of the host of celebrities who flocked to Katrina following the disaster, "I saw some, I call it `sorry celebrities.' They'll go down there and hook up with the people to take a photo-op. I look at Sean Penn and all I can think is he's a steaming pile of elephant crap."

Mr. T's announcement sent shockwaves through both the entertainment and political world.
Celebrity activist Brad Pitt wasted no time in issuing a statement concerning Mr. T's actions, "Angelina (Pitt's girlfriend Angelina Jolie for those of you who have been living in Siberia or suffering from a brain injury) and I were extremely inspired by Mr. T's removal of his jewelry. Therefore, we have decided to have another baby and sell the first pictures of that baby to the highest bidder. All proceeds will go towards the buying of new jewelry for Mr. T."

President Bush choked back tears at a morning press conference held from the site of the G8 summit in the former Soviet Union, "I think this is a sad day for all Americans. I only hope that one day we can all live in a world where Mr. T can wear his jewelry again. I know all Americans join me in saying that this is the legacy we want to leave our children."

Russian President Vladimir Putin, who was also on hand for the press conference, added his sentiments. "George, you typical, self centered, stinkin American scumbag, we Russians still watch A-team every Friday night at 8 p.m. What do you filthy American scumbags know about A-team?"

President Bush grinned at the Russian President and responded, "Oh Vladimir, Shut the %@*! up."

At a later press conference, when reporters questioned Mr. T as to why he waited almost a full year after Hurricane Katrina to make his announcement, he responded, "I don't know, but it has nothing to do with my new talk show, I pity the fool, debuting at 8 p.m. on TV land."

When asked about his opinion on the current crisis in the Middle East, T. responded with his typical Clubber Langesque flourish, "I pity the fools that f--- with Israel. Cough up Gilad and the rest you crazy terrorist bastards and end the conflict."

Editor's Note: I do not endorse nor do I approve of the use of the work bling.

Ha, you can never go wrong with some political commentary from a member of the A-Team!

Mr. T later donated his bling to the IDF stating that his bling weighed more than most bombs and offered them to be dropped on the huzzy-bull-uh.

Mr. T attached a note to the bling bomb that read, "A gift from the A-Team. Death to ahluh!" muuuhahahaaa...

I never take seriously to celebrities and what they do or say. I am interested in some degree - mainly fashion and how they worked hard to be where they are, but sometimes, I feel that a lot of what they say is for publicity and publicity only.

I have to report that while working out next to 'T' at 24-hour fitness (for once the truth leaves my lips) in Sherman Oaks, I've noticed a certain bulkage in the vicinity of his neck.

I do believe that he is secrectly hoarding some of the precious jewels he has professed to giving up.

Oh...celebrities and the lies they tell.